Is this how they see us? Creating an antiracist online module for a course on visual culture 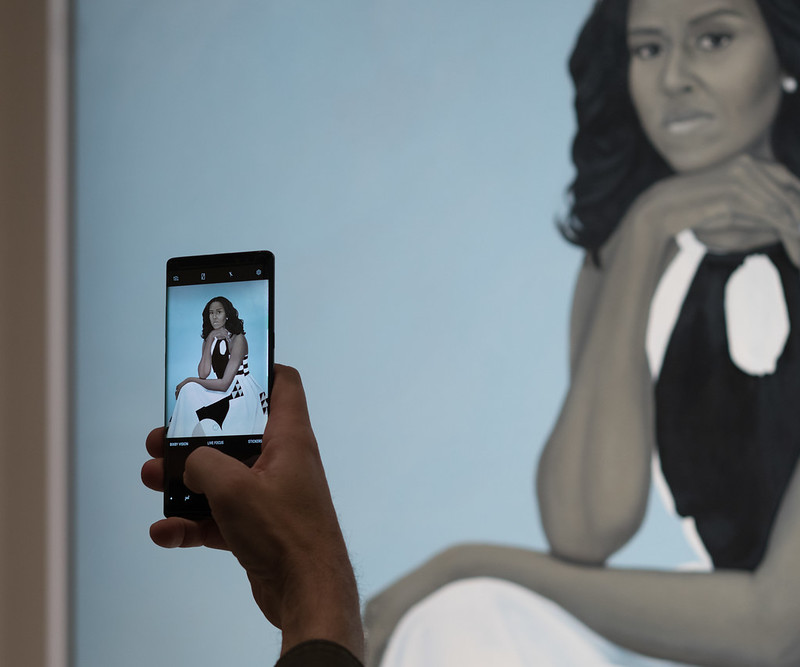 At the media preview of the portraits hung in the galleries of the National Portrait Gallery of the Obamas. The portrait of Michelle Obama is by Amy Sherald. Photo by Victoria Pickering (vpickering) on Flickr, CC-BY-NC-ND 2.0.

Editor’s note: This post is one in a series by Geneseo faculty who in Intersession 2021 taught courses that either focused centrally on issues of racial justice or incorporated those issues via dedicated modules and interwoven content. To find all posts in this series, part of Geneseo’s project of becoming an antiracist college, look for the tag “intersession 2021”.

In July 2018, I received a grant from Geneseo’s Teaching and Learning Center to create a series of modules for the course Visual Culture Today. My student assistant, Thomas Mossey (a sophomore at the time), joined me in front of a computer screen as we tried to figure out how to create a module on representations of African Americans in mainstream media. Tommy prepared several examples for me to look at, but all of them were difficult to use as a tool of empowerment. We found stereotypical representations easily: Aunt Jemima, Mammy, and countless other caring Black women of indeterminate age. That summer, we centered the module on such stereotypical representations and asked students to watch racist cartoons showing white people in “black face.” We asked students to reflect on whether and by whom (if anyone) these cartoons should still be seen.

In fall 2018, I taught this module in a face-to-face classroom. We talked about the idea of “re-presentation” and that often media distorts rather than reflects reality. As part of the learning materials, students were directed to a video, Blackface: A cultural history of a racist art form, that discussed this racist practice.

The students were warned in advance that the material might be offensive or disturbing. After watching the video, the students were also offered the option to pursue a library of racist cartoons and minstrel shows and reflect on what should be done about cultural heritage of this sort. The material and resulting discussions were occasionally very difficult, both for the students and for me as their instructor. Many times, we had to stop and assess whether, as a class, we were willing and able to continue. Often, the students’ responses to the module surprised me. Most thought that the stereotypical representations, and especially “black face,” should just be excluded from our culture. Some went as far as to argue that they should not even be accessible to scholars for research. Others thought that the documentation should remain but should be accessed only for research or for understanding of the past in order not to create similar mistakes in the future. These conversations were some of the best that we had in the class. The material ignited students’ passion and inspired them to express their opinions in a way that most of the textbooks do not. In the responses, I read words such as “awful,” “disgusting,” “hurtful,” and “traumatic.” But I also knew from further discussion that the students felt safe to express their opinions. They expressed a desire to work more on topics of race and visual culture. I knew that I had hit an important point.

When I was preparing for the Covid intersession edition of Visual Culture Today, I wanted to return and redo the module on the representation of people of color, but I knew that I wanted to make it more relevant to the current understanding of antiracism. Mainly, it was important to give some examples of positive representation and address more recent issues of representation. Tommy was doing an independent study class with me in fall 2020, and he was as excited as I was to rethink our approach. Our methodology this time was to show the continuity and rupture between the representation of the past and present when it comes to blackness. So in addition to the discussion of stereotypical historical representations, we concentrated on more contemporary artists, such as Amy Sherald, who focuses on art historical realism and Black subjects.

Sherald is best known now for two commissioned paintings, one of Michelle Obama and the other of Breonna Talyor. There is a quiet, dignified, and embodied presence conveyed in Sherald’s portraits. It takes a bit of time for the viewer to realize what keeps them looking at the person depicted. The artist portrays brown and black skin using gray tones, so while the overall impression of the skin is dark, the color does not mimic reality. According to Sherald, she wanted to represent people of color but avoid being slotted into the identity politics part of art. She was interested in changing our perception of darker skin to make it more universal and innovative, or as New York Times culture critics Wesley Morris and Jenna Wortham recently noted, convey “blackness without the gaze of whiteness.”

The students were really impressed by Sherald’s work. In the discussion posts, they told me again and again about their interest in portraits. Many decided to find out more about the portraits and the artists and noted the importance of relatability and positive role models for up-and-coming artists and art historians. 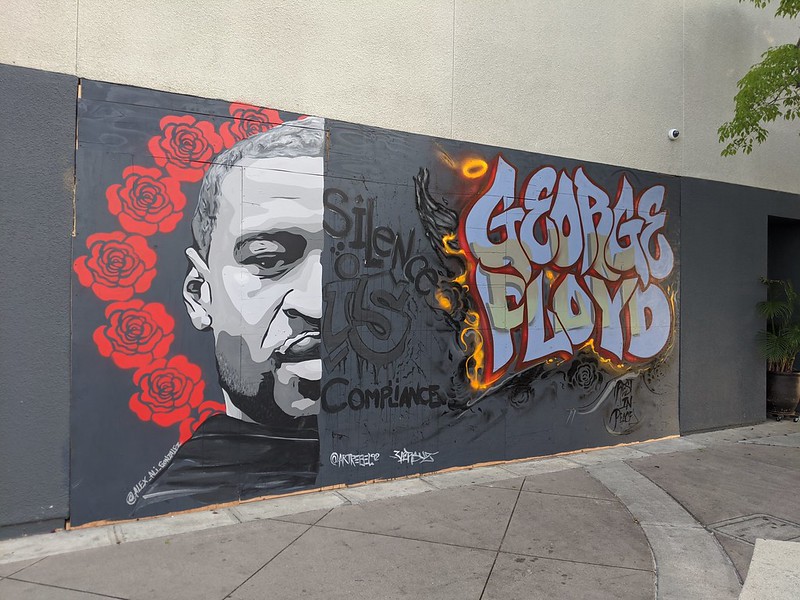 Another part of the new version of the module was use of art during the recent Black Lives Matter protests. We provided an article from The Verge that reports on numerous murals and on public artwork that commemorates BLM and its participants. We asked students to choose one that they found most interesting and explain why. That way they had to combine their knowledge and passion about the subject with what art historians call “formal analysis”—consideration of elements in an artwork such as color, composition, form, and rhythm.

In developing the module, one of my learning objectives was to inspire students to think about the role of art in everyday life. Looking at the discussions and reflections, I think I succeeded. The students told me that now, when they look at social media, they notice how people of color are represented. They note that they often pay more attention to the graffiti and art in public areas and have more curiosity about these images. I realize that what I have done in this module is just a drop in the proverbial bucket, and that it is hardly enough even to start an in-depth conversation. However, together with the other issues that we cover in the class, such as female empowerment, science as spectacle, and gender in advertising, I think I can introduce students to the multifaceted and often exclusionary world of visual culture. As consumers and producers of visuality, my students can help shape the field—even if they do so one drop or image at a time.